The days of Salvation, photo essay by Monidipta Saha

According to the Hindu religion, the human life is nothing but a cyclic journey of birth and death that is continuing from infinite times. Every living life is actually a smallest divine part of the supreme almighty i.e. “Bramha” or the sole creative power of the universe. And the reunion of ‘Atma’ i.e. soul of human life with that supremacy is supposed to be the completeness of journey of life. The only mean to be free from the continuous cycle of birth and death is the process of salvation or “Moksha”.
With this deepest sacred faith, from different parts of India, thousands of spiritual persons including sanyasis i.e.

Hindu monks come to Varanasi, the ancient sacred and spiritual city of India, for the rest of their life. According to Hindu scripture that one who is graced to die on the land of Varanasi, would attain salvation and freedom from the cycle of birth and re-birth after their burning cremation. Varanasi’s prominence in Hindu mythology is virtually unrivalled. A city where the past and present, life and death, light and darkness, water and fire, eternity and continuity co-exists.

The city of Varanasi is situated on the west bank of the holiest of all Indian rivers, the Ganga. The Ganga is believed to have flown from heaven to wash away the worldly sins of the human race of mortals. Mark Twain, the American author and litterateur, who was enthralled by the legend and sanctity of Varanasi, once wrote: “Varanasi is older than history, older than tradition, older even than legend and looks twice as old as all of them put together.” To get the freedom from the recycling of life, more than thousands of over aged persons mainly widows comes to this city, spends rest part of their life at different old age home with morning prayers, uncounted chanting of praises from day to night, and waits for the final moment. Interestingly, many of the persons who are critically counting their last moment are taken by their family member to the land of salvation – Varanasi, according to their last wish. They come here only to surrender themselves to the god with adhered hope that the holiness of the city and streaming water of ‘Ganga’ will convey their aspiration and make them free from the cycle of reincarnation. And they will surely be the part of the divinity leaving behind all of the sufferings from sin and limitations of worldly existence.

A two storied building named “Mukti Bhavan”, at the middle of the city, established on 1958, is dedicated as the sacred temporary home to them who are praying for Moksha or Salvation. Interestingly in this building, life and death both exists mutually. The family members of the Mr. Bhairav Nath Shukla, caretaker of the building, are spending their life at one part of the building, whereas some rooms on the ground floor are dedicated to those persons who are wishing their salvation and supposed to be near of last moment.

The family members take the person to Mukti Bhaban and waits for the final departure. One little unknown room with least accessories becomes the few days abode to them – per se the waiting room of a port for final departure to the desired holy destination of beatitude. There is a minimum rent for accommodation or electricity, which have to pay by the family member’s of that person. But there is only one condition, they will be allowed only if they are expected to die within 15 days. So, that those who too yearn salvation get the chance. The holy sounds of the chanting from the morning and evening “Pujas” in this house purifies the ambience everyday which streams an eternal peace to the blinking eyes of those terminal lives. The faith of capitulation to the supremacy with counting the days of last breath; far away from the decade long known smell of home or loving faces, slowly makes the distance closer to the most awaited acme of liberation and finally announces an adieu to the mortal world.

The story work was conceptualized in my mind after visiting the place during a tour to Varanasi. In general, we define a home or a building as the place to live our life, enjoy the every moment with happiness and a shelter from every negative wind. But this house redefines the meaning of home with a new idea that a home can be a port to another state of world. After that, I started documenting the work to portray the depth of the thoughts of this process of salvation. 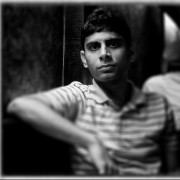 (b.1980), I started my photographic journey from 2012; however, the attraction towards the magic box was my childhood addiction. Along with the professional job in a governmental research laboratory as research worker, I always in search of free time to go out on the street for a frame that reflects the essence of life. The approach of storytelling is my favourite part about photography. I am seriously inclined to the documentary or story telling photographic projects related to the human activities or the issues related to social aspects.
Leave a Reply