Searching for light in the dark, holding hands not to fall, walking in the fog, not knowing what’s gonna happen to us. We learn from each other. We are talking about the soul, the power of thought, science and the strangest theories on earth. Often we don’t understand each other, we argue and then at one point we take each other’s positions, still remaining on different sides. We call this «unsynchronized agreement». We are from different planets and we can’t help it.

Random notes from my boyfriend’s phone:

July 4, 2017, 12:37 a.m.
A person experiences fear only when the harmony inside him is broken. People are scared because they never really belong to themselves. Entire societies are made up of people frightened by the uncertainty within themselves.
Hermann Hesse

November 20, 2016, 9:39 p.m.
People tend to remember things that are consistent with their beliefs, regardless of the evidence.

February 14, 2019, 8:08 p.m
The global task of humanity is to explore itself as an independent single mind that is observing (being aware of) itself.

December 1, 2017, 11:27 p.m.
Memory is an old set of brain states that need to be repeated. The present colors the past differently. 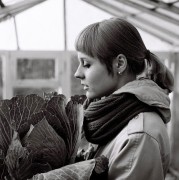 Daria Nazarova (b. 1991, Russia) is a visual artist working with documentary photography, archive, book projects. She is a member of the Union of Photographers of Russia. In 2019 she graduated the Academy «Photographika» in St. Petersburg. Daria is interested in the topic of the memory of generations, intergenerational connections, connections to the place, self-identification and identity, horizontal communities.
Leave a Reply