At Valtaki beach, a little further from Gytheion town, in the southern Peloponnese, a ship rots in the sand. Many stories have been told about it, but the truth is that it was abandoned to its fate. It was in 1980 when it was sailing out of Gytheion when his captain fell ill and had to be taken to hospital. Since then the ship has been abandoned for unknown reasons. Today, he is an attraction for travellers exploring Laconia. A ship, rusting in the waves and sand.

During our journey to the Southern Peloponnese, I had the chance to make some images. Approaching him, I saw his name, it was Dimitrios. Looking carefully inside, I felt a sadness, the waves and the wind had eroded his limbs. Dimitrios must have once been a mighty, beautiful ship. 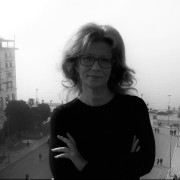 Born in Greece and based in Athens. Lia has attended courses on Art and she is a holder of a degree from the University of West Attica, Greece. Her focus is on Travel Photography, History and Culture.