For generations, Irish Travellers, also called “tinkers”, had been travelling around the country in horse-drawn carts and wagons, seldom remaining in one place for more than a couple of weeks, presumably because of the limited demand for work at any one place. But they began to suffer in the 1970s as the demand for their work decreased significantly.A movement emerged to settle travelling families on “halting sites” where they would have basic services and the children could go to school. Today, the Travellers are no longer “nomads”, the vast majority of them living in houses or caravans on official “halting” sites.

This change in lifestyles did not come easy, particularly for the men who found themselves with very little to do as the unemployment rate is fairly high in the Travellers community. Although there are still approximately 30,000 living in Ireland they are clearly at the bottom of Ireland’s social and economic ladder. The children of the Travellers are the first generation to experience a settled life. Nevertheless, this photo essay shows that the young Travellers still identify with their culture even though they now live in an environment made of concrete slabs.

The Travellers are religious and large families are the norms. Gender roles are clearly defined even for the youngest of children. When being photographed, the young boys always show their tight fists and take a fighting position. Boxing is their favorite sport, punching bags and trampoline available on most halting sites. The girls, on the other hand, quickly take a provocative pose, putting their hands on their hips and pouting their lips.

But perhaps the stronger link to the culture is the connection to animals. Most Irish Travellers are raising dogs, especially greyhounds, with lots of puppies around. Horses are especially important for the Travellers. Though keeping a horse in a halting site can be challenging and costly, the Travellers dearly want to maintain that part of their culture, and want to share this passion with their sons.

As Ned, the father of nine beautiful children told me, “We are not travelling anymore, but we are still Travellers and we need our horses. It gives us something to do.” And it gives a meaning to their lives. 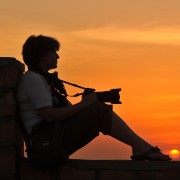