One look through the window, and it confirms that the world outside is still in a state of quarantine. The roads are deserted and the people out there are few and far between. Working-from-home has become the new normal. While we continue convalescing from the effects of the deadly virus, unsure of what the future has in store for us, we find ourselves acclimatizing ourselves to this more shut-down lifestyle.

It is this uncertainty that has been central to our emotions and thought processes over the course of the last few months. Amongst the plethora of saddening news and negative developments around us, we have been swiveling inside the cycle of being down and depressed, to something more optimistic and back to being sad. Confined to the rigid walls of our homes, there is not much we can really do. It is during these dark times that I find myself drifting towards films, and books, and quietly hoping for them to take me to some far-off foreign land. A new place, different from the constructs we’re all stuck in.

On rare occasions I turn myself to my camera. Looking through the viewfinder, I somehow hope to catch something new in the rather familiar surroundings around me. The pictures I take are in black-and-white, monochromatic like life itself, finding myself to be devoid of colors.

I try to look through the pitch-black darkness outside. Sometimes I succeed in doing that. It gives me a thrill and I feel a little better, albeit for a minute moment.

Doing street-photography in these times has become quite challenging and carries a huge amount of risk.

I try not to get bogged down by the limitations and use my Canon 1200D wherever and whenever I possibly can. I look for hours and hours out of the window, gazing at the ever-changing cloudscape, the setting sun, the bright moon and the the occasional airplanes flying in the sky, free. By switching to my handy zoom-lens, I manage to capture the far-off things easily. In my eyes though, they too are devoid of any real colors. I shoot them in monochrome only to saturate them with excess colors in post-processing. It looks a little unreal, but then isn’t what we’ve been experiencing a little unreal too?

Feelings of loneliness and seclusion have often been central to our feelings during the lockdown period. To make myself less lonely, I try to consume myself, watching an unhealthy number of films and relentlessly obsessing about them. More often than not, it’s all for a lost cause as I again look out aimlessly and long for companionship and intimate conversations. Watching and analyzing a huge amount of movies has influenced my photography in a lot of ways. For example, my preferred mode for shooting pictures has become the landscape mode, usually in a very cinematic 16:9 aspect ratio. Also, I keep yearning for more drama in the pictures I click.

However it very rarely comes out the way I imagine it in my head, which in turn leads to disappointment.

Throughout my photography, I have refused to conform to particular style or form. Always experimenting, I am perpetually on the search for a style that I could and would stand by.
But as I keep clicking more and more pictures, I realize that one cannot just choose a style for themselves. In the course of making images, the style chooses them. One does not have to force it. Till that moment though, I shall keep trying different approaches and methods in making pictures. Hopefully, my own distinct style will break out soon.

Growing up, I had a natural affinity towards good artworks. I’d stare with awe at the paintings and with time, I learnt to appreciate them. However, I wasn’t particularly talented with the paintbrush in my hand. Nor was I good at poetry. Not even sculpting. So, I had to look at other artistic mediums which would satisfy my artistic desire. That medium turned out to be photography, and the camera became my paintbrush. I caught on to it like a house on fire. Immensely curious, I’d be spending multiple hours everyday learning about this beautiful device called the digital camera.

My primary method of shooting photographs involves going out on long photowalks, on the most crowded of streets and shooting amidst the utter chaos, in an act of uncomplicated honesty.
Unfortunately, I haven’t been able to indulge in this during the ongoing lockdown. There was only so much I could do inside the confines of my home.

While photographing things, I don’t really start-off with a lot of frames in my mind. The shooting process comes rather naturally to me. I tend to walk a lot during such events and whenever any interesting object pops up, I take out my camera and frame it. Technical details don’t matter as much to me as long as there’s a heart and soul to the photo. It’s only during processing later, that I really look at the pictures, analyzing them, and unearthing the hidden meaning behind it.

I’m self-confessedly not the happiest person out there, and I don’t go out looking to capture pictures with a particular theme either. But as I’ve realized during the course of my two years of photography, there have been certain themes which continue to be present, being a recurring motif in most of the pictures.

These themes, as I’ve analyzed, include feelings of isolation and loneliness in the modern city.

Especially at a time when we are legally prohibited from going out and about our daily routines, such feelings are sure to overwhelm us. I sometimes wonder what kind of lost universes I would capture if I actually decided to undertake the task of photographing the emptiness of the long and unending network of streets.

Probably nothing at all. 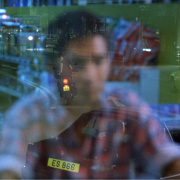 Arkadeep Mitra is a 20 year old photographer from Calcutta. As a very disillusioned engineering student, he often indulges in photography to escape the realities of life. Though refusing to conform to any particular genre, you can usually Arkadeep in the streets looking through the unlikeliest of angles trying to frame the unlikeliest of pictures.

Swinging on the rope