In search of a better life
by Sutapa Roy
India

“In search of a better life” is a voyage through a situation where a sense of existence crisis creates a conflict between evolution and extinction and form a strange world in front of us.

The story is revolving around brick making factories in India where the women and their children are trapped by the socio-economic system of unorganised working sector, exploited and abused by the social structure or the higher authorities. women labour is high on demand in India considering them to have lesser stamina, unskilled and easy to be exploited, thus heavy work can easily be dispensed to them in return of low wages that is nearly nothing. Women are petrified, dominated under virile power; used to secure men’s self-esteem by physical and mental abasement. Children are not only deprived from love and care, but also would lend their hand in field or housework as merely small helps are necessary, which can add to the total outcome. Their life is so unstable, fragile and alarming that a feeling of emergency prevails in them to deal with the situation. To face the existence crisis, they either have to evolve to fit in, or they have to be extinct and disappear.

At first I didn’t have any plan to do this story when I first visited the place with one of my friends, just to see how the bricks are made, for his study purpose. He used to visit the place quite often to see every step of brick making process and I used to accompany him carrying my little camera around my neck. Purpose was just to document the process. We used to talk to the workers to know the actual course in elaborate narration and take their images. I remember Kashish – a girl and a brick kiln worker who wished to have her picture taken with my sun-glass on and her mixed response of happiness and wonder when she saw herself in the picture printed in her hand.

West Bengal, India 2018. Kishori Devi, who is suffering from severe health issues, has been working all her life in brick making factories. Now she has lost her strength and considered as a useless entity in the family by her alcoholic abusive husband. Her only concern now is her grand daughters who surely have no future here and probably have to face the same destiny.

In this course of journey these women and children became familiar with me. Slowly and unknowingly, I also started getting an access to their personal life and every little happenings, that revealed a whole new, yet notorious, world ahead of me. As days went by and the condition of these under privileged people decided to develop little by little in front of this outsider, being a woman, I found myself in a same abode, in a same situation. Perhaps my fight is against a different society or a different idea, but the questions have always been the same; the question of existence as an individual as well as a human in the first place. Somehow, in a conscious or unconscious mind, not only I started to place myself in their situation and experienced the scenario from their perception, but also I realised how similar our struggle is to exist and keep alive our entity as a human, beyond any gender discrimination and any deprivation in two different society in this one Earth.

West Bengal, India 2019. In between life and death.

Primarily this work is based on the subjugated women and children of brick making industry, their fragile life and surviving catastrophe. The story built up on a tight thin rope where a constant tug and pull through their day to day life, stimulating tension in between extinction and evolution and creating a strange world around us. Later, somewhere in between or the other, an insight analogy urged me to encompass myself with them in my intuitive mind. At the end, I realised that I also made a journey with them – from an observer to become a part of it.

West Bengal, India 2019. Seema is lost in thought; perhaps finding out stability in life is something impossible for her.

Chattisgarh, India 2019. Grasping life when there is a possibility to fall apart any moment.

West Bengal, India 2019. Given a chance, I wish to be as independent as a tree.

West Bengal, India 2019. Being deprived of identity Sapna often search for herself in her dream, perhaps a better world to live in.

West Bengal, India 2017. life does not end here. There is nothing like a beautiful sunset, the blurry future will be clear with the first light of dawn. Although we often tend to quit when things does not work well, I will continue my fight to defeat such tendency and to give hope to them for whom I fight. 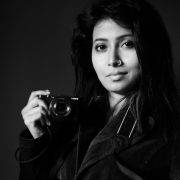 Sutapa is a storytelling photographer based in Kolkata, India. Being introvert person photography has been her language to express her thoughts and emotions which is sometimes hard to describe in words. She is currently employed as freelance photographer and working on her personal projects/stories simultaneously. Human life and social issues is her main focus now.

A sound mind in…