America in a Trance
by Niko J Kallianiotis
United States

America in a Trance dives into the heart and soul of the Pennsylvania industrial regions, a place where small town values still exist and sustainable small businesses once thrived under the sheltered wings of American Industry. It was here, the cradle of American industrialism, that immigrants from tattered European countries once crossed the Atlantic for a better future. Some, like Kallianiotis, still do.

Born and raised in Greece but now a proud Northeastern Pennsylvanian, Kallianiotis has called this place home for roughly twenty years. Those decades have taught him how beliefs from both sides of the fence in the current political climate have a direct effect and interest in these towns. And yet, Kallianiotis achieves a certain level of neutrality within the work, whether it is the hard Pennsylvania coal towns to the East, the shadows of looming steel stacks to the West or every faded American dream in between.

Through the use of light and color, an illumination of hope, the photographer explores his own relationship with the land. Within America in a Trance there is the silhouette of what once was, streets and storefronts thriving, and the echo of that time still ringing in the bricks of the houses and churches.

(To purchase a signed copy of the book visit www.nikokallianiotis.com) 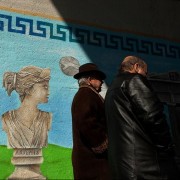 Niko J. Kallianiotis is an educator and photographer based in Pennsylvania, United States. Originally from Greece, he started his career as an editorial photographer and has worked for several newspapers. His first monograph, America in a Trance (Damiani, 2018) has been reviewed and exhibited on the national and international scale. He is currently teaching at Drexel University and the University of Scranton in Pennsylvania and he is a contributing photographer to the New York Times.