Art In Transit is an existing initiative of Srishti Institute of Art Design and Technology, which has been organizing events around art and its evolution in a city that is growing and multiplying to no bounds. This year they organized a unique event called festival of Stories.

The event was held on 22 and 23 September 2018 in Bangalore, India at the Cubbon Park Metro Station. It explored the narratives of the city through events, workshops, performances, and art installations. The two-day event celebrated the sister cities of Bangalore and San Francisco through anthologies created by independent artists (comics, zines, stories).

Having never been inside Cubbon Park Metro station, it was some revelation for me. The whole place looked like a different planet, much different from the hustle and bustle of Bangalore city. There were smiling faces, colored walls, a coexistence of handcrafted art and public transport and its commuters going about their routines in perfect harmony. The event was well organized in terms of management of space, coordination with the authorities, and it felt like something that was always meant to be there. And looking at the freshness of ideas and the life it has acquired, one wishes such things only grow more.

As I walked through the huge corridors admiring the mystifying works of art on the walls or hanging between the tall platforms from the roof, or even on the staircases, I wished the walk would never end. It is such things that make one really positive about the city and its future. Art is the way to go forward. The expression of the artist is quite individualistic, yet is essential to the growth and survival of the human voice amidst a growing concrete jungle.

Another event here was the festival of Propositions, a public call to invite interventions in this Metro space(Imagine, Propose, Manifest). And I felt it is so relevant to the current times, and also celebrates the city’s strong startup culture.

I attended the memory Maps Workshop and came out of it with so many interesting learnings and experiences. We were made to create an imprint of our memories associated with the city. It was such an engrossing experience that I didn’t realize when 4 hours passed.

Next day I attended the Magic with Holograms Workshop. This was another brilliant session, where the conductor, Sai Krishna, a faculty at Srishti, took us through a bit of theory into optics, how we perceive images, how does it relate to our brain and neural process, optical illusions, and finally the concept of holograms. We were made to create our own small holograms with simple material like CD covers and tapes. The joy of creating something handcrafted in a short time in a public space, and then to see it work, just can’t be summed up in words. Though our holograms weren’t really any masterpieces by far, we still enjoyed the play of lights, as images popped out from our phones and reflected off the plastic pyramids. I made a few new friends in the process, and walked out smiling, having made a tiny achievement.

I also caught few other events like poetry recitations (one called Market Memories was an intensely personal experience as narrators and poets told animated accounts in their own languages and expressions and drew a potent visual imagery). Another unique performance/installation was Dataprint, where the performers free-danced and presented a densely theatrical piece about how data moves from an individual to ether, how one gets sucked into the hypnotic world of information, breaks free and then gets sucked in again. 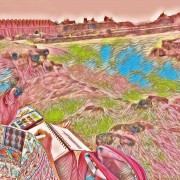 Seema Misra (1985) is a self-taught artist and writer. She has been a part of the communications industry for over nine years and currently works at Hewlett Packard Enterprise as a Technical Writer. She also undertakes freelance projects for illustrations, content creation, and social media marketing through her blog Lonely Canopy. To unwind, she watches world cinema or travels across it. She talks to her plants and sometimes people as well. But more often than not…you will find her curled up in her favorite corner reading a book while sipping strong coffee. She is as passionate about travel as she is about her art. She figured that the best way to combine her two passions would be through a self-illustrated travelogue of her cozy and enchanting sojourns across the country.

A Lullaby of Life