Eight months ago I found in a suitcase I left in Liège (Belgium) a dozen of films from 2014.
For this forgotten essay I used rolls of Ilford Pan 100 and a point-and-shoot film camera.
I wanted to make my photographic process easier. It was reminding me when I started photographing with a little camera I borrowed from my girlfriend 12 years before. At this time I didn’t even know who Cartier-Bresson or Winogrand were !

Using a point-and-shoot camera is really not the same to me than shooting with a rangefinder camera.
I just have to frame and to click the button, no need to think about settings or results.
The only problem is that a lot of photos were totally failed because of that low-speed film I had chosen.
Northern France where I come from and Belgium are known to be cloudy yet!

The essay’s name is from one of the first photo I shot: a chalk graffiti on Saint-Lambert Square in Liège.
It was written “Les Ruines du Vieux-Monde”: Ruins from the Old World.

Unfortunately this project ended when I broke my camera. 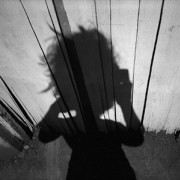 (1982) - Photography is my best reason for not having a full-time job. I’m living in Wanderland.

Street with my 5MP friend