[T]his project is a series of photos I took in the Luar Batang area, Penjaringan, North Jakarta. The area is usually called the Kampung Aquarium, catch my first attention when I came to this place. Last year this area was affected by eviction (April 2016), and right now occupied again by some residents by building emergency tents, semi-permanent houses, public toilets, to houses of worship such as mosques.
The buildings look increasingly chaotic because it was erected on the ruins of buildings that had previously been flattened to the ground, and some even set up on the sea with a wooden board.

Although only the triplex roof boards are vulnerable to leak, even collapsed when the rain comes, plus difficulty of getting clean water, they continue to struggle every day to survive. Seen citizens activity still running as usual and the children were playing with cheerful.

Even though, I still hope they get helps and attention especially from the government, so they will get a better life. 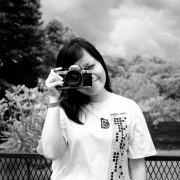 Born in Jakarta, November 1993. Ade Andryani is an amateur photographer from Indonesia. Already finishing her Bachelor of Pharmacy. Interested to observed all things around her, especially about street photography.

Another Story From Home

Praying in the Time…

The Sounds Of Dream

I Dreamed I Dream…