The “Rodyna moja” photo series consists of photographs taken in the Ukraine in 2017. The word “Rodyna”, which in Russian means “homeland” and in the Ukrainian language “kinship”, provides the series’ context: The photographer sets out on a journey, prompted by an accident of a family member, through a country he left as a young man 20 years ago. He revisits his homeland in a state of battle, a battle for a better future against the consequences of war, economic stagnation and an increasing loss of people of the younger generation who emigrate in masses. He meets his kinsfolk, scattered in various rural and urban areas of the country, during a transition from poor to more prosperous, a transformation from old to new. Thus the portrayal of the relationship between land and family becomes a subtle snapshot of Ukrainian society today. 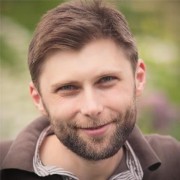 Ruslan Hrushchak is a portraiture and documentary photographer. Born in Ukraine in 1978. Now he lives in Leipzig, Germany. Ruslan focuses on regular people in paces and situations that highlight an aspect of who they are. He is also the founder of appPlant GmbH, a mobile software development firm, and has taught software engineering at Leipzig University.