In 2016, a street photographer named Dan Rodriguez created an underground movement called Tubeography.
Thanks to the advent of technology, one can steal clandestine black & white portraits of commuters travelling on the London tube. It all began in Aldgate East (2014) when Dan took a snap of a traveller and received positive reactions from friends and family. This led to the birth of STRANGER, a still photography project that explores the role of the smartphone as a tool to find beauty in an era of surveillance capitalism.

The smartphone allows for much closer street photography. It offers the possibility to capture a more intimate image.

Dan’s style is Urban Realism. His aim is to create beauty within the familiar spaces of our everyday lives. Dan likes to look at things with an anthropological eye that he developed during his MSc in Social Anthropology. Dan’s endeavour is to explore the idea of urban spaces as gaps between human interaction with the hope to build bridges instead.

“I think there’s a beautiful sadness resting on the faces of people travelling on the underground. A sense of melancholia that I try to capture. I think this beautiful sadness is at the core of this city’s underbelly. An artificial world that is obviously not compatible with any living organism. I see this world as the new river of Babylon; the train represents the endless flow of that river. A place where withered souls travel through their level of existence, hoping to climb the great infinite tower of success.”

STRANGER is part of the tubeography movement, a series of still photography projects in protest against surveillance capitalism.

The smartphone has become a tool of mass-control and surveillance. The images highlight the artistic possibilities within the technology and yet still raise awareness on the issue.

In addition, STRANGER is an observation of London life on the tube through black and white photography. The aim was to portray a sense of loneliness and to find beauty within the banal. And to recreate the notion of what’s like to travel on the tube through Dan’s eyes as a Londoner. 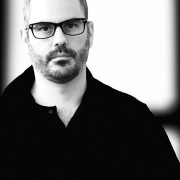 Dan Rodriguez is a very passionate London based multimedia artist. He was born in December 1982 in Santa Cruz de Tenerife, Spain. Dan started freelancing as Graphic Designer after obtaining a BA in Film and Media from the University of London.