Inspired by the Richard Bach novel “Jonathan Livingstone the Seagull”.

[J]onathan Livingston Seagull is not a Seagull like everyone else. It’s a Seagull who discovers the beauty of hovering in the sky, seeking perfection in flight because he believes that the flight itself has its own inherent beauty. He doesn’t want to follow the crowd, rejects the life of flock, doesn’t want to fly only for food, but aspires to a different ideal, an ideal of freedom, space and blue skies, light and heat, breeze and sparkling sea. From the story emerges the desire to fight and to stand out, to get what he believe in, even at the cost of not being understood by his families and by one’s fellows, to be labeled as inconvenient and rebel. Attitudes that might be those of a maverick man, a man trying to achieve his goals, his form of success even when it does not represent what the company expects of him. Thus became the symbol for those brave enough to follow his own inner laws and are not influenced by the prejudices of others. It’s a metaphor that reflects the human condition all too often forced into patterns and plaster roles and that leaves no room for imagination, aspirations and dreams. 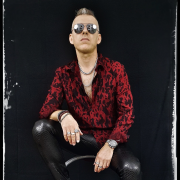 Michele Punturieri, born in Reggio Calabria, Italy, December of 1976. Degree in Economics. Free-lance photographer. Some of his works appeared on Italian and international webzines. Black and White street photography addict.

Workshop with Phillip Toledano | Being Personal

Children in the Jewish community of Trieste